What are the cruciate ligaments? 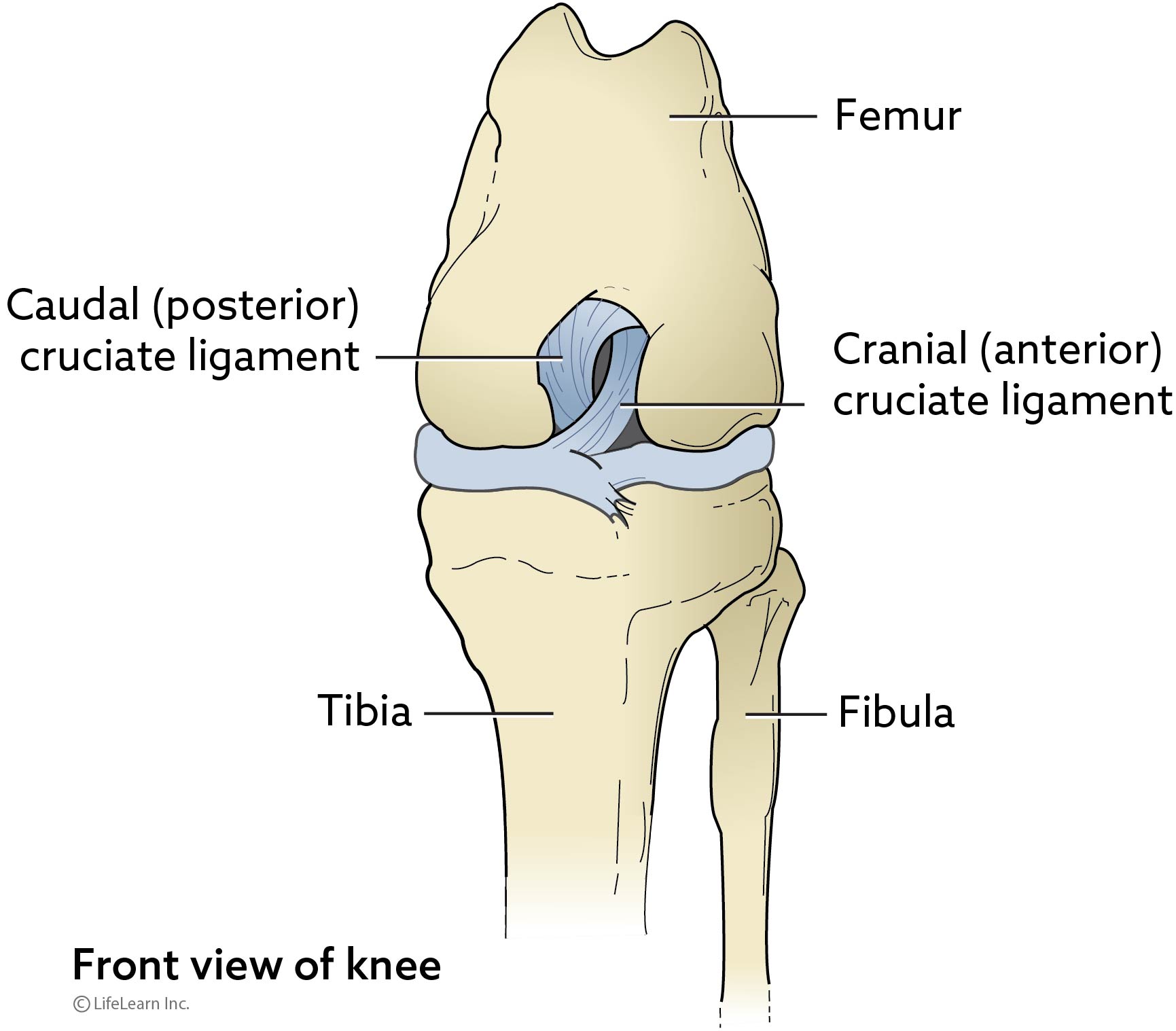 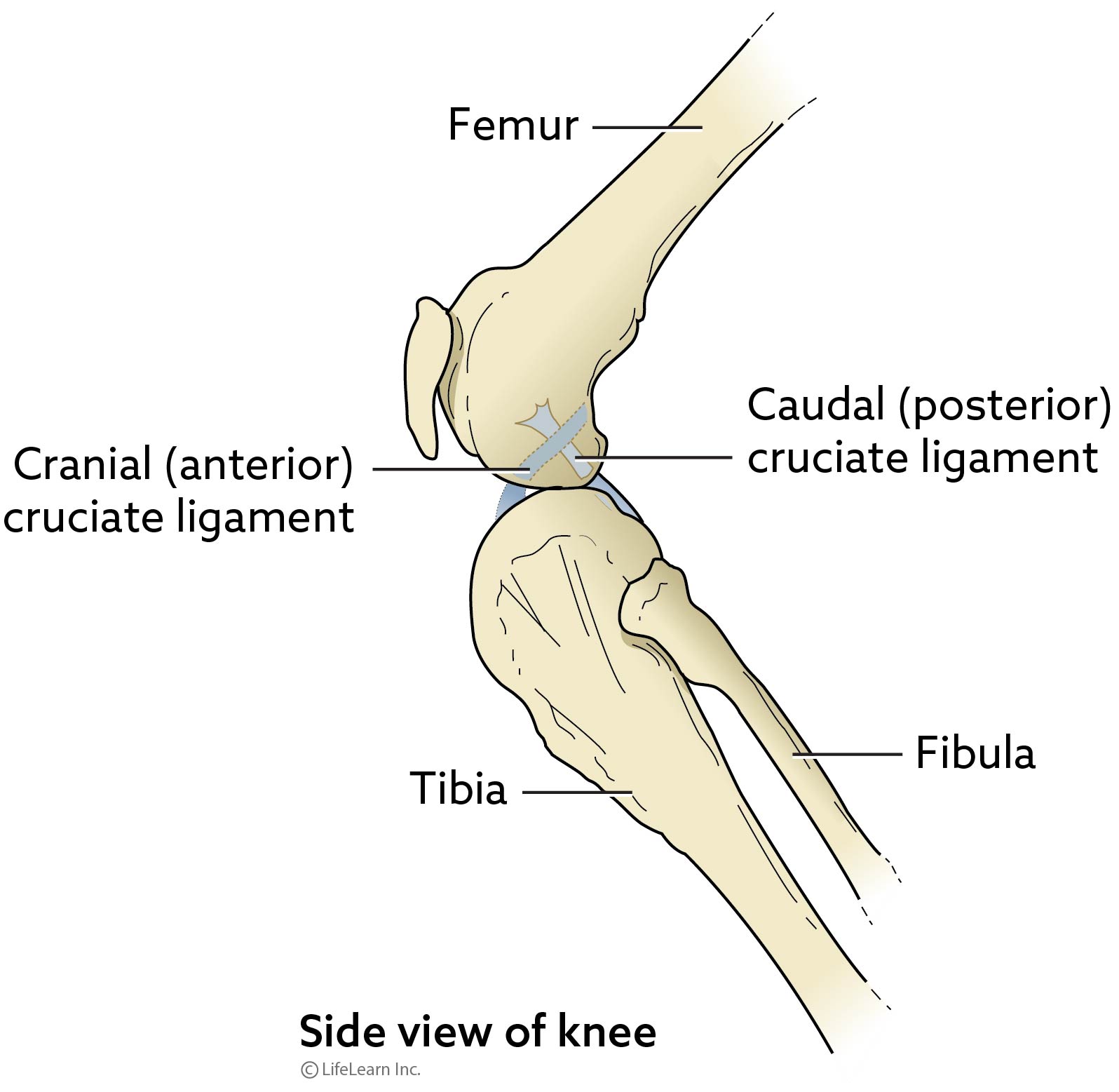 is anchored on the front part of the lower leg bone (the tibia) and runs up and to the back of the upper leg bone (the femur). The caudal cruciate ligament is anchored in the back of the tibia and connects to the front of the femur. The CCL are the main supporting ligaments in a cat’s knee. Their primary function is to prevent the lower leg from moving forward of the femur during movement. When the ligament is torn or unstable, the lower leg slides forward, also know as a 'positive drawer sign.

Cruciate ligament injuries are common in dogs and considered relatively uncommon in cats.

How does a cruciate injury occur?

The knee joint of the cat is one of the weakest in its body. It is relatively unstable because there are no interlocking bones in the knee joint. Instead, it is held together by several ligaments, including the cruciate ligaments, which allow it to move back and forth like a hinge, but restrict its front-to-back and side-to-side motion.

When severe twisting of the knee joint occurs; the anterior or cranial cruciate ligament most commonly tears or breaks. When the cranial cruciate ligament is torn, instability occurs that allows the bones to move in an abnormal fashion in relation to each other. It is difficult for the cat to bear weight on the leg without it collapsing. This condition is painful and, if untreated, can lead to permanent joint complications. 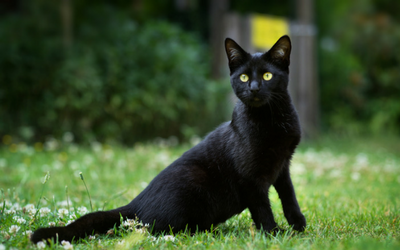 How is a cranial cruciate ligament rupture diagnosed?

With acute cruciate injury, there is often a history of trauma such as an automobile accident or a fall from a height. In some cats, cruciate injury is secondary to another knee problem such as a luxating patella (kneecap that slips out of place). The most reliable means of diagnosing that a cruciate injury is torn can often be demonstrated with the cat awake. If the lower part of the leg can be pulled forward, a 'positive drawer sign' is said to occur and is highly suggestive of a torn CCL. If the cat is in severe pain, has very strong leg muscles, or is uncooperative, it may be necessary to use sedation in order to examine and palpate the joint thoroughly.

Is other joint damage common?

Occasionally the injury that causes the cruciate injury also results in tearing of one or both of the menisci or cartilages that are located between the bones in the knee joint. These menisci may be viewed as 'shock absorbers' for the joint. At the time of surgery, these are examined and repaired as necessary. The collateral ligaments (the two fibrous bands running along the sides of the knee) or the patellar ligament (running along the front of the knee joint with the patella or 'knee cap’) may also be injured.

How is it treated?

Correction of a torn CCL often requires surgery. A skilled surgeon can create a replacement ligament and stabilize the joint so it functions normally or nearly normally. Post-operatively, your will need to limit your cat's exercise for several weeks; for the average cat, this is not a difficult proposition.

Is there a non-surgical treatment for cruciate ligament rupture?

In certain cases, surgery may not be advised for a variety of reasons. If surgery is not an option for some reason, the cat's activity must be severely curtailed, with no jumping or running allowed for up to six weeks. Unfortunately, the cruciate damage, when left untreated, will result in a rapid onset of arthritis in the affected joint. If surgery is performed, it is possible that the cat will still develop arthritic changes in the joint, but this will occur much more slowly and to a lesser degree than if surgery is not performed.

Does obesity play a role in this condition?

Obesity or excessive weight can be a significant contributing factor in cruciate ligament rupture. The ligament may become weakened due to the strain of carrying too much weight, or other factors associated with obesity may cause ligament changes, causing it to tear more easily. Obesity will make the recovery time much longer, and it will make the other knee more susceptible to future ligament injury or rupture. Weight loss is as important as surgery in ensuring rapid return to normal function, as well as being a preventive measure to help protect against this debilitating injury.

© Copyright 2017 LifeLearn Inc. Used and/or modified with permission under license.