What and where are the cruciate ligaments? 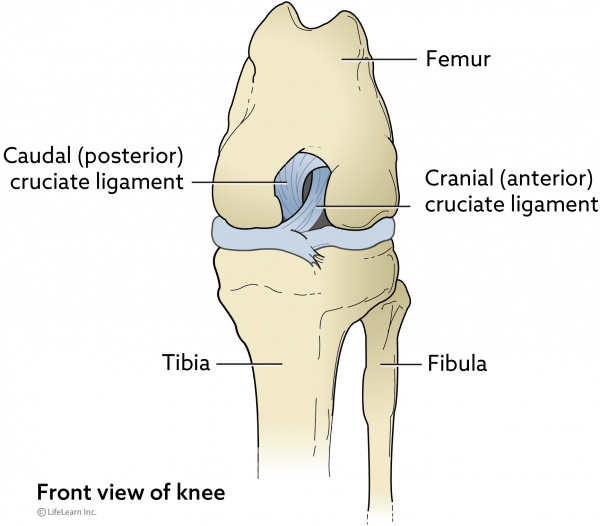 The word cruciate means 'to cross over' or 'form a cross'. The cruciate ligaments are two bands of fibrous tissue located within each stifle (knee) joint. They join the femur and tibia (the bones above and below the knee joint) together so that the knee works as a stable, hinged joint.

How does a cranial cruciate injury occur?

Based on its anatomy, the knee joint is a hinge joint. It is relatively unstable because there are no interlocking bones in the joint. Instead it is held together by several ligaments, including the cruciate ligaments, which allow it to move back and forth like a hinge, but restrict its side-to-side motion.

The two most common causes of cranial cruciate rupture are trauma and degeneration of the ligaments within the joint. Acute or traumatic cruciate rupture is caused by a twisting injury to the knee joint. This occurs most often when the dog (or athlete) is running and suddenly changes direction. This places the majority of the body weight on the knee joint, and excessive rotational and shearing forces are placed on the cruciate ligaments. This injury usually affects the anterior or cranial (front) ligament. A cruciate ligament rupture is usually extremely painful and the knee joint becomes unstable, resulting in lameness.

A more chronic form of cruciate damage occurs due to progressive weakening of the ligaments as a result of repeated trauma or arthritic disease. Initially, the ligament becomes stretched or partially torn and lameness may be only slight and intermittent. With continued use of the joint, the condition gradually gets worse until a complete rupture occurs. 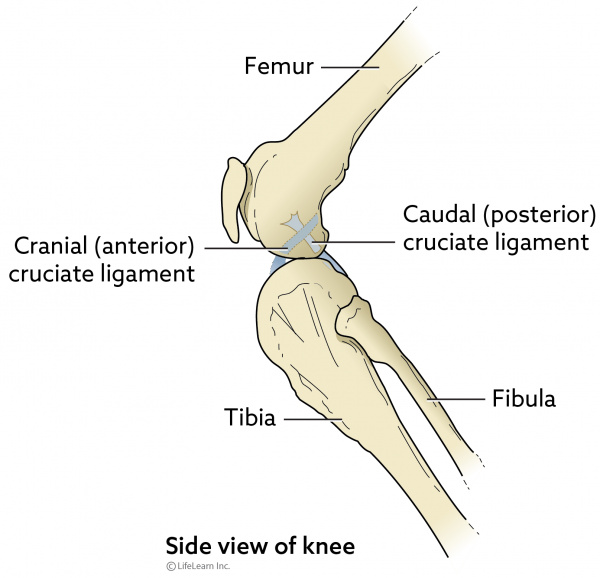 How is it diagnosed?

With traumatic cruciate rupture, the usual history is that the dog was running and suddenly stopped or cried out and was then unable to bear weight on the affected leg. Many pets will 'toe touch' and place only a small amount of weight on the injured leg.

During the lameness examination, your veterinarian will try to demonstrate a particular movement, called a cranial or anterior drawer sign. This abnormal forward movement of the tibia (lower leg bone) in front of the femur (thigh bone) indicates laxity in the knee joint. It may be necessary to administer a sedative to relax the dog enough that the veterinarian can perform this test. Other diagnostic tests such as radiographs (X-rays) may also be necessary.

Is other joint damage common?

Inside the knee joint are pieces of cartilage called menisci. The menisci act as shock absorbers between the femur and tibia. The menisci are often damaged when the cruciate ligaments rupture. They are usually repaired at the same time as the ligament surgery.

Is an operation always necessary?

Dogs weighing less than 10 kg (22 lbs) may heal without surgery, provided they have severe exercise restriction such as strict cage rest for six weeks. Dogs over 10 kg (22 lbs) usually require surgery to stabilize the knee. Unfortunately, most dogs will eventually require surgery to correct this painful injury. Consult with your veterinarian to determine what the best course of treatment is for your dog.

What does surgery involve?

There are various surgical techniques performed to stabilize the knee joint following cruciate rupture. The surgeon inspects the joint, removing fragments of the ruptured ligament and repairing the menisci if needed, then fashions an artificial ligament to stabilize the joint and prevent abnormal motion. Most often the artificial ligament is placed outside the joint capsule of the knee joint (called an 'extracapsular repair'). See handout "Cranial Cruciate Ligament Repair: Extracapsular Repair and TightRope Procedure" for further information. There are newer surgical techniques available called a tibial plateau leveling osteotomy (TPLO) or a tibial tuberosity advancement (TTA). Both are especially beneficial for larger, more athletic dogs. Your veterinarian will discuss the best treatment option for your pet. See handouts "Cranial Cruciate Ligament Repair: Tibial Plateau Leveling Osteotomy (TPLO)" and "Cranial Cruciate Ligament Repair: Tibial Tuberosity Advancement (TTA)" for further information on these procedures. 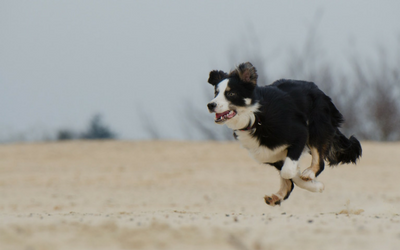 It is important that your dog have limited activity for six to eight weeks after surgery. The activity restriction may be less if a TPLO or TTA has been performed. Provided you are able to carry out your veterinarian's instructions, good function should return to the limb within three months.

"It is important that your dog have limited activity for six to eight weeks after surgery."

Unfortunately, regardless of the technique used to stabilize the joint, arthritis is likely to develop in the joint as your dog ages. Arthritis develops more slowly and to a lesser degree if the dog undergoes surgery. Weight control and nutritional supplements such as glucosamine/chondroitin (see handout “Glucosamine Chondroitin Combination” for more information on this supplement) may help delay the onset of arthritis in your pet. Many dogs will receive physical therapy after the surgery to speed recovery and reduce complications. Your veterinarian will discuss your pet's recommended post-operative care with you prior to surgery.

Is obesity such a problem?

Obesity or excess weight can predispose dogs to cruciate ligament rupture or tear. If your dog is overweight, the post- surgical recovery time will be much longer. Obesity also greatly increases the risk of injury to the other knee, especially during the recuperation period. Weight loss is as important as surgery in ensuring rapid return to normal function, as well as being a preventive measure to help protect your dog against this debilitating injury. Your veterinarian can help to develop an appropriate weight loss plan for your pet.

© Copyright 2020 LifeLearn Inc. Used and/or modified with permission under license.