First Aid for Bleeding in Cats

When it comes to bleeding, what you cannot see can be more serious than what you can see. Visible bleeding from a broken nail or cut ear looks scary and makes a terrible mess, but internal bleeding in the chest or abdomen that you cannot see is much more dangerous. That said, bleeding from any source is concerning if a lot of blood is lost. To minimize external blood loss, pet owners can provide first aid for bleeding cats until you arrive at your veterinary hospital.

What happens when a cat is bleeding? 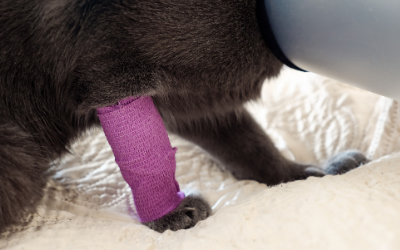 When a vast amount of blood is lost over a short period of time, shock may occur. A cat in shock has an increased heart rate and low blood pressure. She may have pale or white gums and breathe rapidly. If left untreated, organ systems shut down and the cat may suffer permanent damage or death. Minutes matter, so pet owners should know how to control bleeding and prevent shock until they can reach emergency help.

What precautions should I take before trying to help my cat?

Safety is important when handling injured cats; both for the cat and the owner. Remember that an injured pet is scared and in pain. Even the sweetest cats may bite and scratch under those circumstances. Take appropriate precautions to avoid being bitten while trying to help an injured cat. You may need to use a muzzle or have someone restrain the cat while you provide first aid. Wrapping the cat in a warm towel may comfort the cat and protect you from injury.

What do I do if my cat is bleeding?

All first aid protocols for hemorrhaging cats have the same goal: control blood loss. But reaching that goal requires different techniques for internal and external bleeding.  While you cannot do much to stop internal bleeding on your own, you can control external bleeding until you reach a veterinarian.

Paws. Wrap the foot in gauze or a small towel and apply constant pressure to the foot. Bleeding should stop in 5-10 minutes.

If the source of blood is a broken nail, you can apply a styptic pencil, silver nitrate stick, or cauterizing powder to the nail. These items can be purchased at the pet store or in the first aid section of your human pharmacy. If you do not have these products at home, try covering the nail with baking powder, corn starch, or flour. You can also stick the tip of the nail into a bar of soap to help stop the bleeding. Keep the foot wrapped in the towel as you proceed to your veterinary hospital.

"To control bleeding, apply pressure to the wound with a clean towel."

If the foot is bleeding from a cut or torn foot pad, look for debris or foreign objects such as glass or metal shards that may be lodged in the pad. If you can easily grasp the object with tweezers, gently remove it. Swishing the paw in cool water may help dislodge tiny particles. If the debris is lodged deeply, leave it alone. Digging too deeply will only worsen the injury, result in more bleeding, and cause pain. If something is firmly or deeply lodged in the paw, it should only be removed by your veterinarian, who can sedate your cat to make the procedure more comfortable. To control bleeding, apply pressure to the wound with a clean towel. Minor tears will stop bleeding in a matter of minutes; however, deeper wounds take longer to stabilize. Also, bleeding may reoccur when the cat walks on the foot. If you cannot stop the bleeding within 10-15 minutes, take your cat to an emergency veterinary hospital.

Legs. Lacerations to the legs often result in significant bleeding if a major vein or artery is severed. Wrap a clean towel around the wound and apply firm pressure. If possible, raise the leg above the level of the heart. If the towel becomes soaked through, do not remove it. Place another towel on top of it and continue the application of firm pressure. Removing the towel may dislodge clots and make the bleeding worse. Proceed promptly to your veterinary hospital.

For minor cuts on legs, look for a foreign body and remove it if you can easily reach it. Flush the wound with clean water to remove any smaller pieces of debris, then cover the wound with gauze or a towel. Keep pressure on the wound by holding the towel in place or taping the gauze around the leg while you transport your cat to your veterinarian.

Torso. It may be difficult to hold a hand towel in place when a cat has a cut on the chest or abdominal wall so taping may be necessary. Surround the towel with 3 or 4 strips of tape that circle the entire chest or abdomen. To avoid impaired breathing, do not tape the towel too tightly.

"If there is an object protruding from a chest or abdominal wound
(e.g., stick or arrow), do not remove it."

If you hear a “sucking” noise as the cat breathes, keep the towel firmly in place and proceed immediately to an emergency hospital. Some injuries to the chest can involve the lungs and potentially be fatal. If there is an object protruding from a chest or abdominal wound (e.g., stick or arrow), do not remove it. Wrap the towel carefully around it without disturbing the foreign object.

Ears. Ears tend to bleed a lot. There are many blood vessels near the skin surface on ear flaps and cats tend to shake their heads which makes the bleeding worse. Place gauze or a small face cloth on both sides of the ear flap, then fold the ear over the top of the cat’s head and hold it firmly in place. You may hold the towel or gauze bandage in place by wrapping tape around the top of the cat’s head and under his neck. Be very careful not to restrict breathing. You should be able to place two fingers between the cat’s neck and the bandage.

Internal Bleeding. It is not possible to stop this type of bleeding without veterinary intervention. Signs of internal bleeding may include pale gums, shallow or labored breathing, or weakness. These can be seen with shock as noted above. If you suspect internal bleeding, transport your dog to your veterinary hospital.

© Copyright 2021 LifeLearn Inc. Used and/or modified with permission under license.